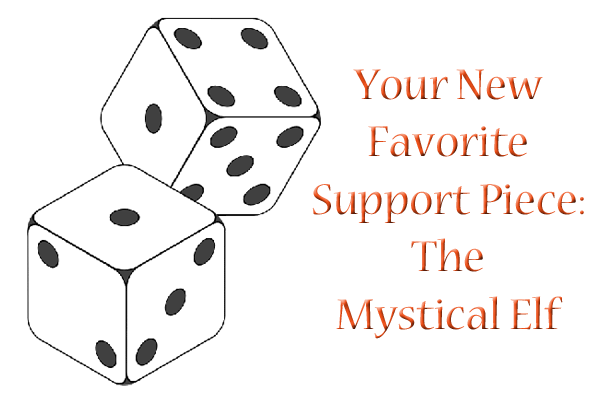 As part of the Yu-Gi-Oh! HeroClix set, there’s one figure you’ll definitely want if you enjoy strong Support pieces. Let me tell you about Mystical Elf!

How to Play Mystical Elf

This little lady is meant to be played close to her teammates so that Mystical Healing can go off and so she can more effectively use Prob and Support. As for defending herself, her Barrier, Phasing, and Willpower make her hard to target and pin down for long. Her 8 move, 10 attack and fairly high defenses most of the way down (including that fantastic 19 on last click) are good enough stats to ensure that she’ll be sticking around for a good portion of the game at least. All this for 50 points–not bad!

Notice the “Trap/Spell,” “Graceful Dice,” and “Skull Dice” rules–these can be used on another friendly Yu-Gi-Oh! character to enhance Mystical Elf’s usefulness even more. Whenever she would be defeated, you can instead turn her into a Spell or Trap card as described. (Skull Dice would be a nasty surprise for your opponent if you’re playing against a beatstick team, and Graceful Dice would be an excellent boost for a character who needs Prob.)

Also, you can include her dial facedown at the beginning of the game for 7 points if you don’t have room for 50 points or don’t want to use her Support characteristics. Just choose your friendly Yu-Gi-Oh! character and set the dial facedown on their card, and you’re ready to play!

Whether Trap/Spell functionality is legal in standard Golden Age games is hotly debated on HCRealms at the moment, but both an official judge and a forum moderator have said that individual venues can house-rule this to be legal or not. Just ask your local HeroClix judge whether they allow Traps/Spells before building your team for standard Golden Age events–if they say no, you can always play Mystical Elf as a regular Clix piece and get most of the benefit. She’s versatile!

As part 1 and part 2 of this gaming strategy series will attest, I’ve been trying to “port” in a strategy from the Yu-Gi-Oh! trading card game to Magic: the Gathering. This has not been an easy process, but I’m continuing to work on finding matching cards and strategies that will work within M:TG’s color wheel of White, Blue, Red, Black, and Green.

If you’re following this process, you inevitably reach a point where you know generally what you want in the deck and you’re ready for a test run. But before you start buying or trading for actual physical cards, you need to make sure the items you’re getting will actually end up in the deck. That’s why I suggest the following practice of proxying your deck-in-progress.

Testing Your Strategies with Proxies

Okay, okay, I know, “proxy” is a bad word to most “serious” (read: competitive) Magic players. But for those of us who don’t win Standard tournaments (and/or buy lots of cards) on a regular basis, using proxies can be remarkably effective at building and testing new decks. It lets you test the strategies first to see if they even work for your deck!

If you don’t want to go the paper-and-pen route with your proxies, you can also build a virtual deck on a service like LackeyCCG, which is a free program you can use to build decks and test against a “dummy player,” or even a real online player if you wish. (Be warned, it’s a jungle of occasionally mean competitive players out there!)

This kind of service is pretty good, but I still prefer to test my decks in real life against another player. If you like to speed-test your decks more and prefer not to use a deck until you’ve thoroughly tested it, however, LackeyCCG and its ilk could be just right for you.

Proxying is a great way to try out cards without having to invest the money in them just yet, which is key for porting in an old strategy to a new game. Give it a try, and see how this can help you create your new-old deck! 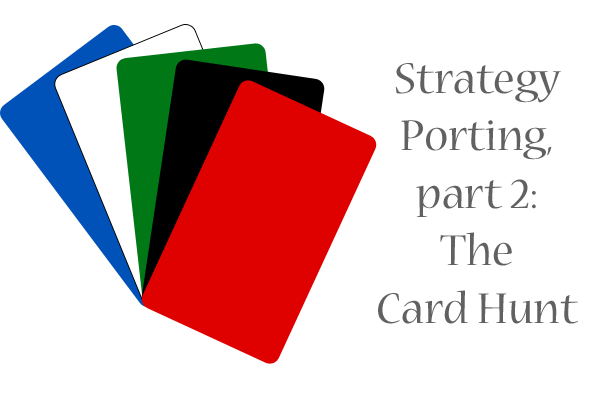 In my introductory post about strategy porting, I talked about wanting to port one of my old Yu-Gi-Oh! decks into Magic: the Gathering–specifically, I wanted to recreate a very control-based deck that worked around getting a bunch of Flip-Effect monsters into the graveyard so that Shadow Ghoul and Chaos Necromancer could be bigger attackers.

This has proven to be much harder than it first seemed. 😛

Problem #1: No Flip-Effect Creatures in Magic

The Morph mechanic does exist in M:TG, but for what I want the creatures to do, there’s not really any Morph cards that do the effects for any kind of reasonable cost. Plus, the ability of Flip-Effect monsters in Yu-Gi-Oh! to block an attack and THEN have an effect go off is hard to replicate in Magic anyway.

Problem #2: No One Color Does It All

With Yu-Gi-Oh!, you don’t have to worry about being able to play your creatures with specific colors of mana. This enables you to have a toolbox-style deck like the one I’ve assembled. But with Magic, if I want to have a deck that is able to play what it needs to play, I have to make sure I’m not running a crazy five-color deck where I’ll never get the amounts of mana I need.

Problem #3: Might Not End Up Being the Same Kind of Deck

However, if I start building the deck with all instants and sorceries instead of creatures, the strategy won’t be quite the same. No longer will I be able to amass a creature-filled graveyard and mow down people with the Magic equivalent of Chaos Necromancer, Mortivore. Instead, it will be almost a creatureless deck…not exactly what I intended.

Some Light at the End of the Tunnel

I agree, there are problems with porting a strategy…but there is hope. Going through the card database available on Gatherer, I was able to find at least some cards that matched up to what I’d like to replicate from my old deck. A partial list appears below, sticking to Blue and Black as the main colors of the deck:

How to Do a Search Like This for Yourself

On to Part 3: Playing by Proxy!

Even when you start playing a new game, your mind sticks to old, familiar channels of play. Take my Magic decks and my HeroClix strategies; when I first started playing Clix, I found myself choosing pieces that were self-regenerative, able to heal themselves from damage, just like I built my Life-Gain-centered Magic decks to do. I also went with lots of little close-combat pieces–they were much like my aggressive decks full of small but powerful creatures.

As I discovered, it’s possible to “port in” a favorite strategy from another game. Even Yu-Gi-Oh! and Magic: the Gathering can play nicely together–read on to find out how!

Before I ever set foot into Magic, I played the Yu-Gi-Oh! TCG, well before Synchro Summons and mecha-Fairies. Maha Vailo, Mirror Force, and old-school “pretty” Fairies were among my cards of choice. But even after I quit playing Yu-Gi-Oh! in real life, I continued to mess around building decks on an old Yu-Gi-Oh! game for Game Boy Advance, using the old favorite cards I cut my TCG teeth on to try out new strategies.

One deck I came up with was based around two monsters: Shadow Ghoul and Chaos Necromancer. 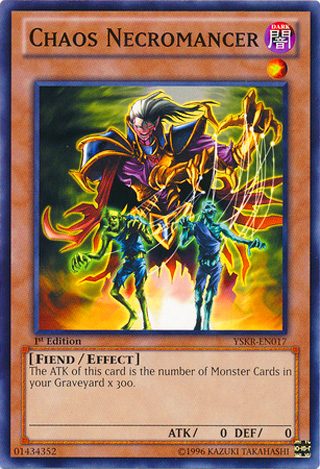 Both images from the Yu-Gi-Oh! Wikia.

Both monsters get Attack Points for each monster that is in my graveyard. Thus, I built a deck full of just easy-to-play monsters–Flip Effect monsters that could control the board, plus some strong, no-Tribute high-Defense monsters to block hits from my opponent’s monsters. If either of these types of monsters were destroyed, in battle or otherwise, they would just pump up Shadow Ghoul or Chaos Necromancer to serious strength.

Below is the original decklist:

The Strategy Behind This Deck

Since you don’t have to play one solid “color” or type of creature to have a solid Yu-Gi-Oh! deck, I could gather all the most efficient Flip-Effect monsters together in one deck. In Magic: the Gathering lingo, this deck contains creature kill, bounce, and removal; it also has life-gain, life loss, mill, damage prevention, AND big stompy creatures. In short, the deck had EVERYTHING, and it was very, VERY fun to play, especially against computerized opponents. I rarely (if ever) lost a game with it.

There was just one problem with this incredibly fun deck–I couldn’t figure out how to port it to Magic. Since I don’t play Yu-Gi-Oh! in real life anymore, I wanted to play this same type of strategy in a game I’m still active in Plus, I was actually curious to see if something like this would even work in Magic at all.

I talked it over with my resident Magic guru (aka, my boyfriend), and he was surprised at the number of Blue and Black effects I had incorporated into this deck. “In fact,” he said as he studied the list of card effects I was looking for, “Black can do a lot of this, but a Blue/Black deck would probably get all the effects you want without having to splash in other colors.”

This surprised me–I am definitely not a Blue/Black player, since I’ve always seen Blue and Black as the meanest color in Magic. But as I looked at the effects I had written down from my own self-created Yu-Gi-Oh! deck, it seemed I was hiding a tactical player underneath all my trappings of Life-Gain and high defense.

Preparing to Port Your Strategy

For Magic especially, you can find some online help for porting strategies. Online services like Gatherer work well for searching out card effects and other types of text. But it also helps to have someone else who is more familiar with the new game’s mechanics, so that together you can figure out how to translate your old favorite abilities into the new game’s language.

In my case, since Magic works around a base of five colors and you have to have mana (resources) to play each spell, strategies work out a little differently from Yu-Gi-Oh!. Here, I couldn’t just pick “the best of the best” in terms of creatures and throw together a deck–I had to make sure I’d be able to PLAY all the creatures I picked. Thus, why my boyfriend said that Blue/Black could do most of the card effects I wanted; he wanted me to have a deck that could consistently get enough mana to play what it needed.

On to part 2 of this series–The Card Hunt!